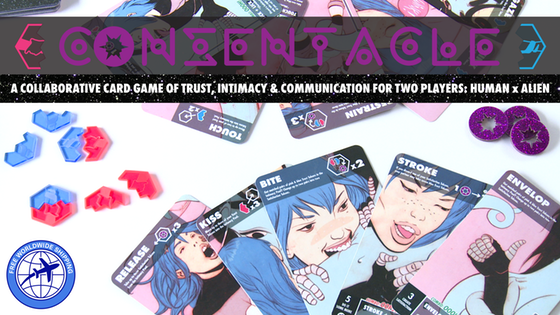 The video says "prototype version shown." Will the game I get look different?

Yes. The version we have now was produced for an exhibition of games in a gallery, and only a few sets were made. There are several differences for mass production: • New card art! Some of the cards in the prototype have repeated artwork, even when it doesn’t really make sense. We’re creating over 20 new illustrations to round out the decks. • new advanced cards! The advanced cards you see people playing with in the prototype version are being replaced by a new advanced game system consisting of 20 cards. • The tokens will be made differently. If we make our base funding goal, they’ll be chipboard tokens. You may have played with this kind of token in other board games – they’re the sort that you punch out of a sheet before playing the first time. If we reach the $55,000 stretch goal, we’ll upgrade these tokens to acrylic tokens, much more like what you see in the video. Because they’ll be made in a factory instead of on a small laser cutter, they may look somewhat different but they’ll be of similar material (acrylic).

• the cards will be slightly smaller (around 80% of the size of the cards shown) but made of more durable material that’s easier to shuffle. These will also be upgraded if we reach our $40,000 stretch goal, to premium ivorycore cards.

How pornographic is this game? Would it be uncomfortable to play with non-intimate friends or strangers?

Consentacle is strongly suggestive but not explicit – there are no visuals with full-frontal nudity, for instance. The most suggestive thing in the game is probably the fact that one card is called “PENETRATE” and can combo with a card called “ENVELOP.” We’ve seen strangers play it together at shows many times – it’s a great way to get to know a consenting stranger, because it’s very possible to play without making your interaction as human beings “all about sex.” Heck, we’ve even seen kids play it (with parental supervision). And that’s fine with us – it’s up to every family to decide when and how to talk about sex, cuddling, and being partially devoured by the maw of a friendly alien.

What are the "speed-dating rules?" Do I need four players to do speed-dating Consentacle?

The speed-dating rules will be fairly straightforward; you could probably figure them out yourself if you put some design thinking into it. (That’s why we’re not charging extra for them.) They’re guidelines for running a “co-op tournament” for multiple players of Consentacle. Like speed-dating, you pair up for quick rounds and then rotate partners to try and figure out who you might have the best match with. If you think about it, it’s possible to do this with only three people and one set of Consentacle – but not everyone could play at once, and it would be a more cumbersome and less entertaining activity. As a result, I recommend speed-dating mode for groups of 4 or 6 players with 2 or 3 sets.

Are there any extra fees I need to pay for international shipping, if I live outside the US?

Nope! We’ve got that factored into all the prices and are working with great partners to make sure it reaches everyone for the same price.

I saw someone say this game was "based on Tentacle Bento." Is that true?

Not really, no. Consentacle is a completely different game: for starters, Tentacle Bento is a competitive trick-taking game for up to four players. The only thing the two games have in common is cards and tentacles (putting them in the same broader genus as Arkham Horror?) but that’s where their tentacles diverge. The idea for Consentacle came about as a response and reaction to Tentacle Bento, which puts players in the role of tentacled monsters trying to “capture” female students, no consent involved. Consentacle started with a simple question: what if you and the tentacled monster were mutually interested and consented to an intimate encounter? That’s why it became a cooperative two-player game about communication and trust.

I read on your blog that you were thinking about adding more characters, or making a version that supports more players. Any chance of that?

We had originally started sketching four characters, but it quickly became apparent that we’d either need to focus on the interaction of only two of them at a time, or make the encounter represented in Consentacle look more like a huge sex party. We chose the former route, and while it’s not out of the realm of possibility to do more artwork for additional characters, it’s not really within the scope of this Kickstarter due to the amount of art involved. As for a game with more than two players, when I began experimenting with and testing rules it became clear that a game with three or more sides would involve a radically different structure. Because I heard from so many people who were excited by playing and watching the two-player game, I wanted to make sure to get that game out into the world. As for three-player games of intimacy, may I recommend Anna Anthropy’s Triad for an exploration of some of the problem-solving involved? http://auntiepixelante.com/?p=1969

Are you using a third-party system for backer orders like Pledge Manager, CrowdOx or BackerKit?

Can I order more than two copies of Consentacle?

Yes you can! Each additional copy is priced at $30 and you can order them as an “addon.” Whatever reward level you select, just add $30 for each additional copy. Anyone who is receiving two or more copies of the game will automatically receive a link for a PDF download of the speed-dating rules (a short description of how to run a Consentacle “co-op tournament.”) If you order five or more copies of Consentacle, the price drops to $22 per copy.

Are you offering a discounted level for retailers?

Retailers may be interested in purchasing five or more copies – in this quantity, the game is available for a discounted price. There are no discounted levels for other add-ons (such as the playmat).

Is there any way to still purchase Consentacle?

We are no longer taking orders for the physical boxed version of Consentacle, which was offered as a limited-time purchase as part of a single print run, now underway.

Once all current backers have received their physical copy of Consentacle, we may be offering the Print n Play version for sale on an ongoing basis – stay tuned for an announcement this summer.

BackerKit is a service that crowdfunded project creators use to keep track of hundreds to tens of thousands of backers—from shipping details, pledge levels, preferences and quantities, whether they have paid or had their card declined, special notes, and everything in between!

The BackerKit software and support team is independent from the campaign’s project team—BackerKit does not handle the actual reward shipping. For more information about the preparation or delivery status of your rewards, please check the project's updates page.

How does BackerKit work?

After the campaign ends, the project creator will send you an email with a unique link to your survey. You can check out a walkthrough of the process here.

I never received my invitation. How do I complete the survey?

The most common reasons for not receiving a survey email is that you may be checking an email inbox different from the email address you used to sign up with Kickstarter, Indiegogo or Tilt Pro account, or it may be caught in your spam filter.

Confirm that the email address you are searching matches the email address tied to your Kickstarter, Indiegogo, or Tilt Pro account. If that doesn’t work, then try checking your spam, junk or promotions folders. You can also search for "backerkit” in your inbox.

To resend the survey to yourself, visit the project page and input the email address associated with your Kickstarter, Indiegogo or Tilt Pro account.

How do I update my shipping address?

When will my order be shipped, charged or locked?

That is handled directly by the project creator. BackerKit functions independently of the project itself, so we do not have control of their physical shipping timeline. If you want to check on the project’s status, we recommend reading over the project's updates page.

I completed the survey, but haven't received my rewards yet. When will they arrive?

As BackerKit does not actually handle any rewards or shipping, the best way to stay updated on the shipping timeline would be to check out the project's updates page.